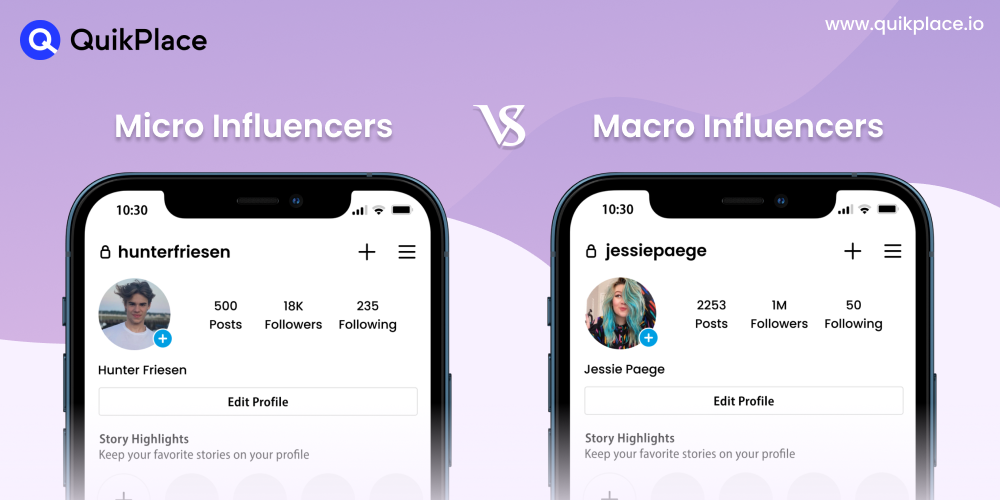 We all are no more strangers to the term influencer. The trend of influencer marketing is increasing day by day.

As this newfound marketing practice develops, various vital strategies emerge. Influencers with large and small followers may have varying advantages and outcomes. Famous influencers offer benefits to a campaign that lesser-known influencers simply cannot. You may be shocked to learn that the reverse is also true.

Kim Kardashian, Kylie Jenner, or Cristiano Ronaldo may be the world's most influential social media influencers, with over 214 million, 225 million, and 275 million Instagram followers with 69.7 million, 38.2 million, and 91.8 million Twitter followers respectively. However, it does not take a large following to make an impression. Creators with a smaller audience may also be powerful influencers. But do you know the difference between Micro and Macro Influencers?

Micro influencers aren't famous people. Their fans range from 10K to 50K, and they are counted for brand and product reviews. A food critic who discusses nearby diners in a small city may be a micro influencer. They may also be a rising fashion model or personal trainer. Micro influencers can specialize in anything; what matters is that they demonstrate a degree of knowledge or competence that encourages faith in their followers.

Macro influencers have a larger following than micro influencers, with 500K-1M followers. They are frequently individuals who have leveraged their skills or expertise to create extremely profitable personal brands. They are professionals in small fields, similar to micro influencers, but they speak to a significantly larger portion of the population.

Micro influencers do have fewer fans than macro influencers. Their fans, on the other hand, are people who are genuinely interested in their content. As a result, their fans are more likely to associate with the material they share, even though it is sponsored.

Meanwhile considering the gains and shortcomings, choosing micro vs macro influencer marketing will come down to one more factor: the purpose of the campaign. If you want to raise brand awareness for a big event or holiday? You may depend on a macro influencer to hit a large audience easily. Do you want to rapidly increase public confidence in a specific community? Then micro influencers are the way to go.

Either your search is for micro influencers or macro influencers, you don't have to go to various social platforms to connect with them. Here at QuikPlace, you can quickly contact influencers for the promotion of your brand.